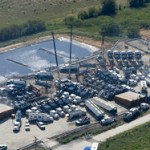 If you are seriously concerned about the quality of PEI’s water and If you want to help insure that our provinces already compromised water supply is completely protected from the negative impacts of oil/gas industry development….then there is an opportunity for you to learn more about the possibilities of Fracturing or Fracking taking place on PEI
Anti-Fracking Rally at Province House on Aug 2nd from 11 till 12.  Head to
to http://t.co/ZOMvAya for more details

WHAT IS FRACKING and WHY should Islanders be concerned.  To follow is an recent article written by Tony Reddin.

Hydraulic fracturing (fracking) for natural gas consists of injecting huge volumes of water underground at high pressure to break shale rocks and allow the natural gas to flow out more easily. The water is mixed with sand, chemicals and gels to lubricate the process and help keep the rocks open. Use of this technology could result in massive water withdrawals and the creation of hazardous wastes.

Environmental regulation in Canada and the United States has only started to take into account the use of fracking for natural gas production. As there is no national regulation, some jurisdictions are creating their own. The NY Legislature has set a moratorium on fracking of horizontal shale gas wells until July 1, 2011 in order to conduct a comprehensive review of the technology.

Natural gas companies use many types of chemicals with this drilling technology, many of them toxic. In other jurisdictions complete disclosure of the chemicals and their amounts have not been given to regulators and the public. These chemicals tend to remain in the ground once the fracturing has been completed, raising concerns about long-term contamination. In Canada, many of the chemicals in fracking fluids are not listed in the federal drinking water guidelines used by municipalities, meaning their presence in drinking water would not be measured, tested, or reported.

We in the Sierra Club are concerned about the threat that drilling and fracking may pose to the safety of our groundwater and surface water on PEI, and believe there is potential that the chemicals and natural gas could seep into the water supply.  There are also potential health threats from the toxic waste water produced by this drilling, and possible gas well blowouts.

We have asked the Ministers of Energy for all the Atlantic provinces and the federal government to put a moratorium on hydraulic fracturing of underground shale for natural gas exploration, until environmental and regulatory issues can be properly examined by government and the public.  We urge all other Atlantic Canadians who are concerned about this issue to contact their elected representatives right away.

The gas exploration company PetroWorth has applied for renewal of its mineral permits for 440,000 acres in eastern PEI.

Welcome to the home of the Wheatley River Improvement Group, a non-government, not-for-profit organization dedicated to the protection and management of The Wheatley River, Cymbria, Chapel Creek, Oyster Bed Bridge, Hornes Creek and Luke’s Creek Watersheds.
If you would like to support WRIG, you can do so online using the PayPal button below: