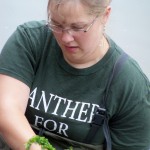 The week began of with a bang and a thunder where we quickly retreated to the indoors.  As such we spent the day building bird boxes.  The next day we managed to get back out of the stream and managed to clean out another really large blockage where there were about 7 or 8 logs down in one area and the water had been forced to widen its banks and became extremely shallow.  This means that through this area there was very little proper cover for the fish and the water would become rather warm.

After cleaning up the blockage we continued down the river and removed two hay bales that were causing another major blockage.  We spent a total of 3 ½ hours with two pitch forks over a span of two days, trying to clean that mess up.  I can personally say that I have never smelled a more nauseating smell than that of rotting, wet hay.  By Wednesday we prepared for building brushmats on Friday and cleaned up more of the river.

Thursday was a day of adventure where we went out into the forest to find a new short cut to the river.  In the process of finding said path I managed to rip a nice large hole in my waders and in very short order had a boot full of water.  We continued on the river and built another brushmat in an ideal location where silt was gathering naturally.  The brushmat took most of the afternoon to build, but she is a beauty!

Friday was to be our big board member day but due to unforeseen events with most members, they were unable to attend.  Tracy and my parents did however manage to trample down the river and learn how to build a brushmat and were able to see what progress we have made over the summer.  Since the attendance was poor for this event but there is much in the way of interest, we hope to arrange another date before the end of the summer that more members will be able to attend on.