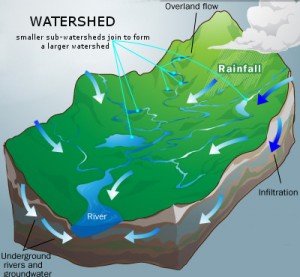 Watersheds direct­ly affect water quality, whether it’s for drinking or recreation.  For example, algae blooms or anoxic events resulting from nutrient rich runoff draining into waterway, harm watershed health, as do pesticides and contaminants.  PEI is dependant on its ground water supplies so extreme care must be taken to protect it.

Watersheds affect wildlife. The polluted water supply that results can become harmful to humans. Aquatic life quickly suffers the effects of watershed pollution while new pollutants introduced into ecosystems alter wildlife habitats. This reduces biodiversity by eliminating some species and introducing new, invasive ones that destroy the native species. That, in turn, can affect the food chain in our watershed, from microbial organisms that feed birds and animals to fish that feed humans.

Components of our Watershed

We are all part of a watershed and dependant on the water that runs through it.

A watershed is the area of land that catches snow and rain and drains it to a larger body of water, such as a marsh, lake, stream. river or estuary. Topography defines the entire watershed, as it shapes the course and speed of water moving through the area.

Watersheds can range in size from a few hectares to thousands of square kilometres.  All watersheds flow from headwaters (the headwaters of the Whetley River Watershed come from Brookfield ) to outlets (the WR empties into Rustico Bay ), eventually ending in the Gulf of St. Lawrence and the Atlantic Ocean.

Watersheds fulfill three primary functions: to capture water, filter and store it in the soil then release it into a water body.

Natural water flow in the Wheatley River changes with season. In the spring flow is high as the snow melts. But steams flow can be is reduced to a mere trickle in hot summers when there is little rain.

The Wheatley River has many tributaries that feed into it. (see maps).

A wetland is an area of land that is saturated with water for all or part of the year. A wetland can be a marsh, pond or bog. Wetlands are typically surrounded by riparian vegetation.

The uplands of our watersheds are areas where there is not usually standing water and would typicly be either forested or agricultural land.

There are no upcoming events.